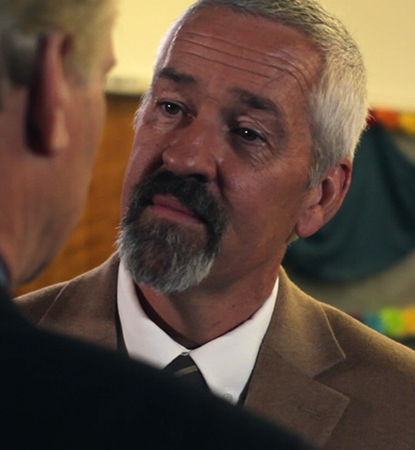 Ken Lawrence, who plays pastor Henry Maxwell, is an actor, voice actor, author, film producer, public speaker, and life coach.  He began his acting career in high school performing in church musicals.  He studied acting and radio/TV announcing at Northern Arizona University, and went into broadcasting and worked for several radio stations.  Through the years, he has acted in church plays and done professional voiceover work for radio and TV commercials.

More recently, Ken’s acting credits include hosting Welcom Home Antelope Valley, a weekly television show about real estate which aired in the Los Angeles market, The Pastor’s House, a Christian children’s show, and Father/Child Projects, a Christian do-it-yourself home projects show.  He has also had starring and featured roles in the short films Hearing God, John’s Miracle, Blessings Missed, and the voice of the Captain in the award-winning stop-motion epic Jericho: The Promised Fulfilled.

Ken is the author of The Gold Panning System, a book that teaches people an easy, step-by-step method for studying the Bible.  He also authored a Bible study on First Samuel that is great for parents to use with their children and teens.